The Age of Gold: The California Gold Rush and the New American Dream (Search and Recover #2) 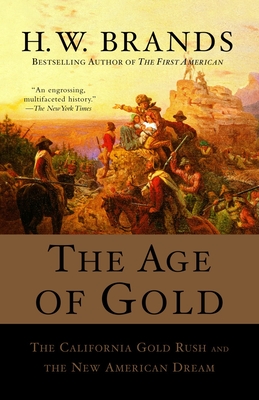 The Age of Gold: The California Gold Rush and the New American Dream (Search and Recover #2)

The California Gold Rush inspired a new American dream—the “dream of instant wealth, won by audacity and good luck.” The discovery of gold on the American River in 1848 triggered the most astonishing mass movement of peoples since the Crusades. It drew fortune-seekers from the ends of the earth, accelerated America’s imperial expansion, and exacerbated the tensions that exploded in the Civil War.

H.W. Brands tells his epic story from multiple perspectives: of adventurers John and Jessie Fremont, entrepreneur Leland Stanford, and the wry observer Samuel Clemens—side by side with prospectors, soldiers, and scoundrels. He imparts a visceral sense of the distances they traveled, the suffering they endured, and the fortunes they made and lost. Impressive in its scholarship and overflowing with life, The Age of Gold is history in the grand traditions of Stephen Ambrose and David McCullough.

H. W. BRANDS holds the Jack S. Blanton Sr. Chair in History at the University of Texas at Austin. A New York Times bestselling author, he was a finalist for the Pulitzer Prize in biography for The First American and Traitor to His Class.