The Pragmatic Superpower: Winning the Cold War in the Middle East 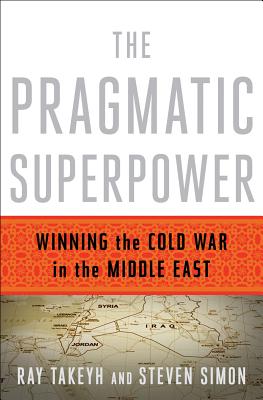 The Pragmatic Superpower: Winning the Cold War in the Middle East

A bold reexamination of U.S. influence in the Middle East during the Cold War.

In The Pragmatic Superpower, foreign policy experts Ray Takeyh and Steven Simon reframe the legacy of U.S. involvement in the Arab world from 1945 to 1991 and shed new light on the makings of the contemporary Middle East. Cutting against conventional wisdom, the authors argue that, when an inexperienced Washington entered the turbulent world of Middle Eastern politics, it succeeded through hardheaded pragmatism—and secured its place as a global superpower.

Eyes ever on its global conflict with the Soviet Union, America shrewdly navigated the rise of Arab nationalism, the founding of Israel, and seminal conflicts including the Suez War and the Iranian revolution. Takeyh and Simon reveal that America’s objectives in the region were often uncomplicated but hardly modest. Washington deployed adroit diplomacy to prevent Soviet infiltration of the region, preserve access to its considerable petroleum resources, and resolve the conflict between a Jewish homeland and the Arab states that opposed it.

The Pragmatic Superpower provides fascinating insight into Washington’s maneuvers in a contest for global power and offers a unique reassessment of America’s cold war policies in a critical region of the world. Amid the chaotic conditions of the twenty-first century, Takeyh and Simon argue that there is an urgent need to look back to a period when the United States got it right. Only then will we better understand the challenges we face today.

Ray Takeyh is a Senior Fellow at the Council on Foreign Relations and previously served in the State Department. He lives in Washington, DC.

Steven Simon is a visiting lecturer in the Department of Government at Dartmouth College and has served in senior positions at both the State Department and the White House. He lives in Norwich, Vermont.