New Yorkers: A City and Its People in Our Time 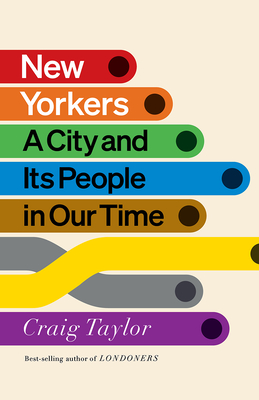 New Yorkers: A City and Its People in Our Time

A symphony of contemporary New York through the magnificent words of its people—from the best-selling author of Londoners.

In the first twenty years of the twenty-first century, New York City has been convulsed by terrorist attack, blackout, hurricane, recession, social injustice, and pandemic. New Yorkers weaves the voices of some of the city’s best talkers into an indelible portrait of New York in our time—and a powerful hymn to the vitality and resilience of its people.

Best-selling author Craig Taylor has been hailed as “a peerless journalist and a beautiful craftsman” (David Rakoff), acclaimed for the way he “fuses the mundane truth of conversation with the higher truth of art” (Michel Faber). In the wake of his celebrated book Londoners, Taylor moved to New York and spent years meeting regularly with hundreds of New Yorkers as diverse as the city itself. New Yorkers features 75 of the most remarkable of them, their fascinating true tales arranged in thematic sections that follow Taylor’s growing engagement with the city.

Here are the uncelebrated people who propel New York each day—bodega cashier, hospital nurse, elevator repairman, emergency dispatcher. Here are those who wire the lights at the top of the Empire State Building, clean the windows of Rockefeller Center, and keep the subway running. Here are people whose experiences reflect the city’s fractured realities: the mother of a Latino teenager jailed at Rikers, a BLM activist in the wake of police shootings. And here are those who capture the ineffable feeling of New York, such as a balloon handler in the Macy’s Thanksgiving Day Parade or a security guard at the Statue of Liberty.

Vibrant and bursting with life, New Yorkers explores the nonstop hustle to make it; the pressures on new immigrants, people of color, and the poor; the constant battle between loving the city and wanting to leave it; and the question of who gets to be considered a "New Yorker." It captures the strength of an irrepressible city that—no matter what it goes through—dares call itself the greatest in the world.

Craig Taylor is the author of the best-selling Londoners and the editor of Five Dials. He lives in western Canada.