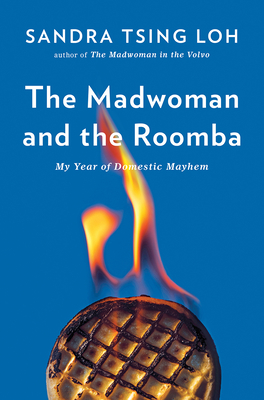 By  Sandra Tsing Loh
Hardcover
$ 25.95
Out of Stock In Store (Click to Order)

A comic exploration of a year in the life of an “imaginatively twisted and fearless” (Los Angeles Times) best-selling author.

Ah, 55. Gateway to the golden years! Professional summiting. Emotional maturity. Easy surfing toward the glassy blue waters of retirement…Or maybe not? Middle age, for Sandra Tsing Loh, feels more like living a disorganized 25-year-old’s life in an 85-year-old’s malfunctioning body. With raucous wit and carefree candor, Loh recounts the struggles of leaning in, staying lean, and keeping her family well-fed and financially afloat—all those burdens of running a household that still, all-too-often, fall to women.

The Madwoman and the Roomba chronicles a roller coaster year for Loh, her partner, and her two teenage daughters in their ramshackle quasi-Craftsman, with a front lawn that’s more like a rectangle of compacted dirt and mice that greet her as she makes her morning coffee. Her daughters are spending more time online than off; her partner has become a Hindu, bringing in a household of monks; and she and her girlfriends are wondering over Groupon “well” drinks how they got here.

Whether prematurely freaking out about her daughters’ college applications, worrying over her eccentric aging father, or overcoming the pitfalls of long-term partnership and the temptations of paired-with-cheese online goddess webinars, Loh somehow navigates the realities of what it means to be a middle-aged woman in the twenty-first century. By day’s end, we just might need a box of chardonnay and a Roomba to clean up the mess.