The Novel of Ferrara 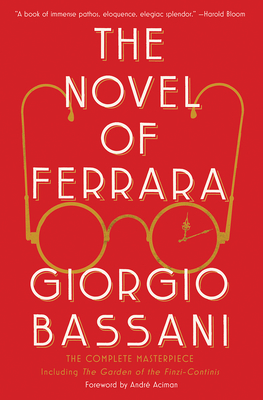 The Novel of Ferrara

By  Giorgio Bassani , Translated by  Jamie McKendrick , Foreword by  André Aciman
Paperback
$ 21.95
On Our Shelves Now

Giorgio Bassani’s six classic books, collected for the first time in English as the epic masterwork they were intended to be.

Among the masters of twentieth-century literature, Giorgio Bassani and his northern Italian hometown of Ferrara “are as inseparable as James Joyce and Dublin or Italo Svevo and Trieste” (from the Introduction). The Novel of Ferrara brings together Bassani’s six classics, fully revised by the author at the end of his life.

Set before, during, and after the Second World War, these interlocking stories present nuanced and unforgettable characters: the respected doctor whose homosexuality is exposed by an exploitative youth; the survivor of the Nazi death camps; the Jewish landowner, returned from exile, to find himself utterly displaced; the schoolteacher whose Communist idealism challenges a postwar generation.

Suffused with new life by acclaimed translator and poet Jamie McKendrick, The Novel of Ferrara memorializes a city deeply informed by the Jewish community to which the narrator belongs. This seminal work seals Bassani’s indomitable reputation.

Giorgio Bassani  (1916–2000) was a renowned Italian author, editor, and critic who spent his youth in Ferrara. After brief imprisonment for anti-Fascist activities, he remained in Rome until his death.

Jamie McKendrick is a poet and translator born in Liverpool and living in Oxford, England.


André Aciman is the author of several novels including Call Me by Your Name, Find Me, and Harvard Square, the memoir Out of Egypt, and two books of essays. He is also the editor of The Proust Project. He teaches comparative literature at the Graduate Center of the City University of New York, where he directs the Writers’ Institute. Aciman lives with his wife and family in New York City.