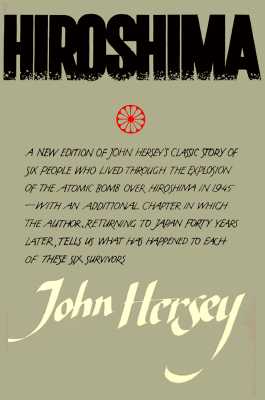 Hiroshima is the story of six human beings who lived through the greatest single manmade disaster in history. With what Bruce Bliven called "the simplicity of genius," John Hersey tells what these six -- a clerk, a widowed seamstress, a physician, a Methodist minister, a young surgeon, and a German Catholic priest -- were doing at 8:15 a.m. on August 6, 1945, when Hiroshima was destroyed by the first atomic bomb ever dropped on a city. Then he follows the course of their lives hour by hour, day by day.

The New Yorker of August 31, 1946, devoted all its space to this story. The immediate repercussions were vast: newspapers here and abroad reprinted it; during evening half-hours it was read over the network of the American Broadcasting Company; leading editorials were devoted to it in uncounted newspapers.

Almost four decades after the original publication of this celebrated book John Hersey went back to Hiroshima in search of the people whose stories he had told. His account of what he discovered about them -- the variety of ways in which they responded to the past and went on with their lives -- is now the eloquent and moving final chapter of Hiroshima.

"At exactly fifteen minutes past eight in the morning, on August 6, 1945, Japanese time, at the moment when the atomic bomb flashed above Hiroshima, Miss Toshiko Sasaki, a clerk in the personnel department of the East Asia Tin Works, had just sat down at her place in the plant office and was turning her head to speak to the girl at the next desk. At that same moment, Dr. Masakazu Fujii was settling down crosslegged to read the Osaka Asahi on the porch of his private hospital, overhanging one of the seven deltaic rivers which divide Hiroshima; Mrs. Hatsuyo Nakamura, a tailor's widow, stood by the window of her kitchen, watching a neighbor tearing down his house because it lay in the path of an air-raid-defense fire lane; Father Wilhelm Kleinsorge, a German priest of the Society of Jesus, reclined in his underwear on a cot on the top floor of his order's three-story mission house, reading a Jesuit magazine, Stimmen der Zeit; Dr. Terufumi Sasaki, a young member of the surgical staff of the city's large, modern Red Cross Hospital, walked along one of the hospital corridors with a blood specimen for a Wassermann test in his hand; and the Reverend Mr. Kiyoshi Tanimoto, pastor of the Hiroshima Methodist Church, paused at the door of a rich man's house in Koi, the city's western suburb, and prepared to unload a handcart full of things he had evacuated from town..."