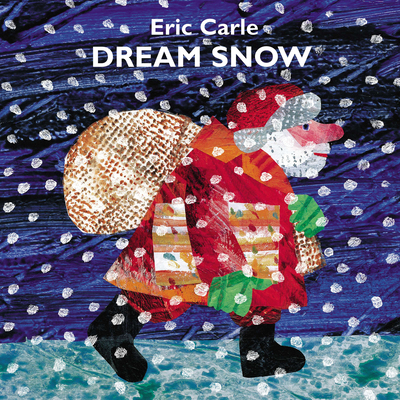 It's December 24th, and the old farmer settles down for a winter's nap, wondering how Christmas can come when there is no snow! It is in his dream that he imagines a snowstorm coming and covering him and his animals—named One, Two, Three, Four and Five—in a snowy blanket.

But when the farmer awakens, he finds that it has really snowed outside, and now he remembers something! Putting on his red suit, he goes outside, puts some gifts under the tree for his animals, and presses a button near a Christmas tree, creating a most surprising musical treat for children everywhere.

"Few in number are the parents who have made it through their toddler's years on just one copy of Carle's The Very Hungry Caterpillar. Dream Snow has similar ingredients: a simple story, lively collage-like illustrations and a fun gimmick for little hands . . ." —Time

"This is a simple, well-told story about a simple farmer. . . . Viewers. . . will want to get their hands on it." —The Bulletin of the Center for Children's Books

"The pictures are in Carle's trademark richly colored and textured collages that capture the snowy magic of Christmas." —Kirkus Reviews