The Redeemers (A Quinn Colson Novel #5) 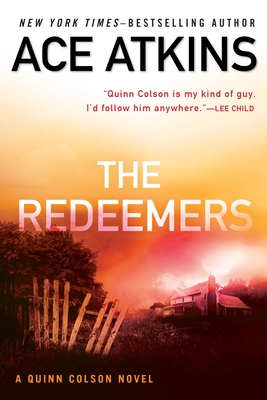 The Redeemers (A Quinn Colson Novel #5)

In this “morbidly funny”(The New York Times) thriller in Ace Atkin’s southern crime series, former Mississippi sheriff Quinn Colson might be out of a job—but that doesn't mean he’s staying out of trouble...

Quinn Colson is unemployed—voted out of his position as sheriff of Tibbehah County, Mississippi. He has offers in bigger and better places, but before he goes, Colson’s got one more job to do—bring down county kingpin Johnny Stagg’s criminal operations for good.

At least that's the plan. But in the middle of the long, hot summer, somebody smashes through the house of a wealthy mill owner, making off with a safe full of money and shooting a deputy. As Deputy Lillie Virgil hunts the criminals and draws Colson in, other people join the chase, too, but with a much more personal motive. For that safe contained more than just money—it held secrets. And as Colson well knows, some secrets can kill.

Ace Atkins is the New York Times bestselling author of the Quinn Colson novels, the first two of which—The Ranger and The Lost Ones—were nominated for the Edgar Award for Best Novel (he also has a third Edgar nomination for his short story, “Last Fair Deal Gone Down”). In addition, he is the author of several New York Times bestselling novels in the continuation of Robert B. Parker’s Spenser series. Before turning to fiction, he was a correspondent for the St. Petersburg Times, a crime reporter for the Tampa Tribune, and, in college, played defensive end for the undefeated Auburn University football team (for which he was featured on the cover of Sports Illustrated). He lives in Oxford, Mississippi.