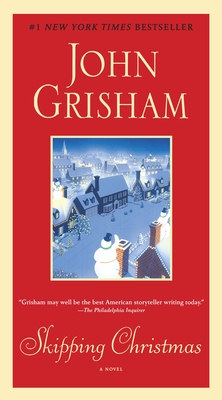 By  John Grisham
Paperback
$ 9.99
Out of Stock In Store

#1 NEW YORK TIMES BESTSELLER • A classic tale for modern times from a beloved storyteller, John Grisham offers a hilarious look at the chaos and frenzy that have become part of our holiday tradition.

Imagine a year without Christmas. No crowded malls, no corny office parties, no fruitcakes, no unwanted presents. That’s just what Luther and Nora Krank have in mind when they decide that, just this once, they’ll skip the holiday altogether.

Theirs will be the only house on Hemlock Street without a rooftop Frosty, they won’t be hosting their annual Christmas Eve bash, they aren’t even going to have a tree. They won’t need one, because come December 25 they’re setting sail on a Caribbean cruise. But as this weary couple is about to discover, skipping Christmas brings enormous consequences—and isn’t half as easy as they’d imagined.

John Grisham is the author of forty-seven consecutive #1 bestsellers, which have been translated into nearly fifty languages. His recent books include The Judge's List, Sooley, and his third Jake Brigance novel, A Time for Mercy, which is being developed by HBO as a limited series.

Grisham is a two-time winner of the Harper Lee Prize for Legal Fiction and was honored with the Library of Congress Creative Achievement Award for Fiction.

When he's not writing, Grisham serves on the board of directors of the Innocence Project and of Centurion Ministries, two national organizations dedicated to exonerating those who have been wrongfully convicted. Much of his fiction explores deep-seated problems in our criminal justice system.

John lives on a farm in central Virginia.