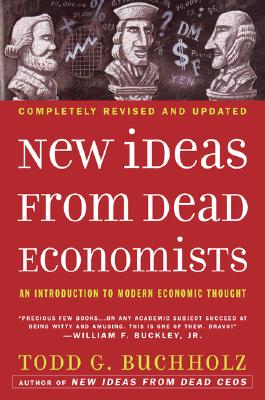 "If you read only one economics book this year, read this one.”—Larry Summers, Secretary of the Treasury for President Clinton, Director of the National Economic Council for President Obama

A must-read for students of economics, New Ideas from Dead Economists offers an entertaining and accessible introduction to the great economic thingers throughout history.

Through the teachings of Adam Smith, John Stuart Mill, Karl Marx, John Maynard Keynes, and more, renowned economist Todd Buchholz shows how these age-old ideas still apply to our modern world. In this revised edition, Buchholz offers an insightful and informed perspective on key economic issues in the new millennium: increasing demand for energy, the rise of China, international trade, aging populations, health care, and the effects of global warming. New Ideas from Dead Economists is a fascinating guide to understanding both the evolution of economic theory and our complex contemporary economy.

Todd G. Buchholz is an internationally acclaimed economist who advises ABC News, as well as some of the world's leading investment funds. He has served as a director of economic policy at the White House and is a contribuiting editor for Worth magazine. Buchholz holds advanced degrees from Cambridge University and Harvard Law School and was awarded the Allyn Young Teaching Prize by Harvard University's Department of Economics.