The Firecracker Boys: H-Bombs, Inupiat Eskimos, and the Roots of the Environmental Movement 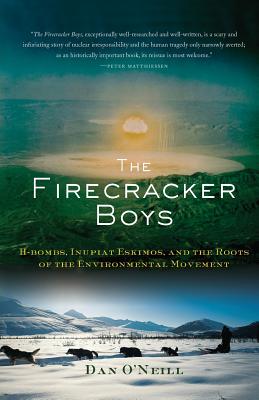 The Firecracker Boys: H-Bombs, Inupiat Eskimos, and the Roots of the Environmental Movement

In 1958, Edward Teller, father of the H-bomb, unveiled his plan to detonate six nuclear bombs off the Alaskan coast to create a new harbor. However, the plan was blocked by a handful of Eskimos and biologists who succeeded in preventing massive nuclear devastation potentially far greater than that of the Chernobyl blast. The Firecracker Boys is a story of the U.S. government's arrogance and deception, and the brave people who fought against it-launching America's environmental movement. As one of Alaska's most prominent authors, Dan O'Neill brings to these pages his love of Alaska's landscape, his skill as a nature and science writer, and his determination to expose one of the most shocking chapters of the Nuclear Age.

Dan O'Neill is the author of A Land Gone Lonesome and The Last Giant of Beringia. He was named Alaska Historian of the Year by the Alaska Historical Society for The Firecracker Boys. He lives in Fairbanks, Alaska.