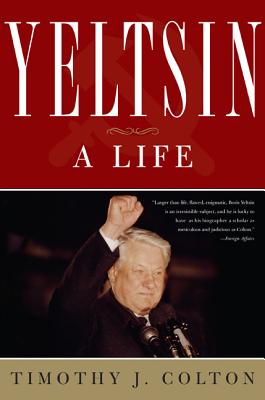 Even after his death in April 2007, Boris Yeltsin remains the most controversial figure in recent Russian history. Although Mikhail Gorbachev presided over the decline of the Communist party and the withdrawal of Soviet control over eastern Europe, it was Yeltsin-Russia's first elected president-who buried the Soviet Union itself. Upon taking office, Yeltsin quickly embarked on a sweeping makeover of newly democratic Russia, beginning with a program of excruciatingly painful market reforms that earned him wide acclaim in the West and deep recrimination from many Russian citizens. In this, the first biography of Yeltsin's entire life, Soviet scholar Timothy Colton traces Yeltsin's development from a peasant boy in the Urals to a Communist party apparatchik, and then ultimately to a nemesis of the Soviet order. Based on unprecedented interviews with Yeltsin himself as well as scores of other Soviet officials, journalists, and businessmen, Colton explains how and why Yeltsin broke with single-party rule and launched his drive to replace it with democracy. Yeltsin's colossal attempt to bring democracy to Russia remains one of the great, unfinished stories of our time. As anti-Western policies and rhetoric resurface in Putin's increasingly bellicose Russia, Yeltsin offers essential insights into the past, present, and future of this vast and troubled nation.

Timothy J. Colton is Morris and Anna Feldberg Professor of Government and Russian Studies and Director of the Davis Center for Russian and Eurasian Studies at Harvard University. The author of numerous books and articles on Soviet history and politics, he lives in Wellesley, Massachusetts.