Trauma and Recovery: The Aftermath of Violence--From Domestic Abuse to Political Terror 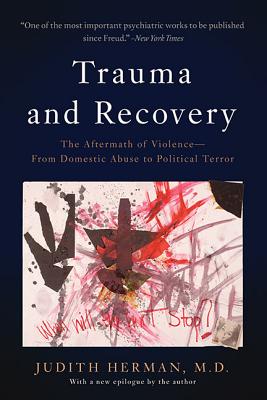 Trauma and Recovery: The Aftermath of Violence--From Domestic Abuse to Political Terror

By  Judith Lewis Herman, MD
Paperback
$ 17.99
Likely On Our Shelves

In this groundbreaking book, a leading clinical psychiatrist redefines how we think about and treat victims of trauma. A "stunning achievement" that remains a "classic for our generation." (Bessel van der Kolk, M.D., author of The Body Keeps the Score).

Trauma and Recovery is revered as the seminal text on understanding trauma survivors. By placing individual experience in a broader political frame, Harvard psychiatrist Judith Herman argues that psychological trauma is inseparable from its social and political context. Drawing on her own research on incest, as well as a vast literature on combat veterans and victims of political terror, she shows surprising parallels between private horrors like child abuse and public horrors like war.

Hailed by the New York Times as "one of the most important psychiatry works to be published since Freud," Trauma and Recovery is essential reading for anyone who seeks to understand how we heal and are healed.

Judith Herman, M.D., is professor of psychiatry, emerita, at Harvard Medical School. Herman is also a founding member of the Women's Mental Health Collective. She was the recipient of the Lifetime Achievement Award from the International Society for Traumatic Stress Studies and the Woman in Science Award from the American Medical Women's Association, and is a Distinguished Fellow of the American Psychiatric Association.