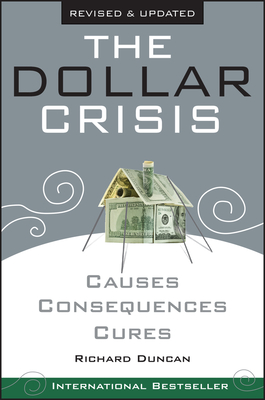 In this updated, second edition of the highly acclaimed international best seller, The Dollar Crisis: Causes, Consequences, Cures, Richard Duncan describes the flaws in the international monetary system that have destabilized the global economy and that may soon culminate in a deflation-induced worldwide economic slump.

The Dollar Crisis is divided into five parts:

Part One describes how the US trade deficits, which now exceed US$1 million a minute, have destabilized the global economy by creating a worldwide credit bubble.

Part Two explains why these giant deficits cannot persist and why a US recession and a collapse in the value of the Dollar are unavoidable.

Part Three analyzes the extraordinarily harmful impact that the US recession and the collapse of the Dollar will have on the rest of the world.

Part Four offers original recommendations that, if implemented, would help mitigate the damage of the coming worldwide downturn and put in place the foundations for balanced and sustainable economic growth in the decades ahead.

Part Five, which has been newly added to the second edition, describes the extraordinary evolution of this crisis since the first edition was completed in September 2002. It also considers how the Dollar Crisis is likely to unfold over the years immediately ahead, the likely policy response to the crisis, and why that response cannot succeed.

The Dollar Standard is inherently flawed and increasingly unstable. Its collapse will be the most important economic event of the 21st Century.

RICHARD DUNCAN has worked as a financial analyst in Asia for more than 18 years, conducting research and publishing investment reports on companies, industries, and economies from India to Japan. One of the first to warn of the impending economic crisis in Thailand in the mid-1990s, Mr. Duncan worked as a consultant for the International Monetary Fund at the height of the Asian financial crisis and subsequently joined the World Bank in Washington, D.C. Mr. Duncan currently works for ABN AMRO Asset Management as an analyst of Asian banks and insurance companies.