The Cultural Revolution: 1967 in Review (Michigan Monographs In Chinese Studies) 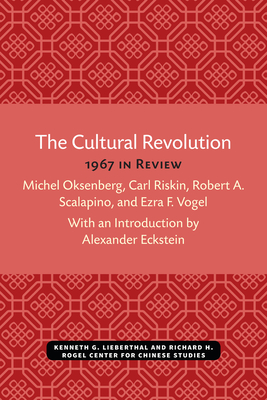 The Cultural Revolution: 1967 in Review (Michigan Monographs In Chinese Studies)

The Chinese Communist system was from its very inception based on an inherent contradiction and tension, and the Cultural Revolution is the latest and most violent manifestation of that contradiction. Built into the very structure of the system was an inner conflict between the desiderata, the imperatives, and the requirements that technocratic modernization on the one hand and Maoist values and strategy on the other. The Cultural Revolution collects four papers prepared for a research conference on the topic convened by the University of Michigan Center for Chinese Studies in March 1968. Michel Oksenberg opens the volume by examining the impact of the Cultural Revolution on occupational groups including peasants, industrial managers and workers, intellectuals, students, party and government officials, and the military. Carl Riskin is concerned with the economic effects of the revolution, taking up production trends in agriculture and industry, movements in foreign trade, and implications of Masoist economic policies for China’s economic growth. Robert A. Scalapino turns to China’s foreign policy behavior during this period, arguing that Chinese Communists in general, and Mao in particular, formed foreign policy with a curious combination of cosmic, utopian internationalism and practical ethnocentrism rooted both in Chinese tradition and Communist experience. Ezra F. Vogel closes the volume by exploring the structure of the conflict, the struggles between factions, and the character of those factions.

Michel Oksenberg is Assistant Professor of Government at Columbia University.

Carl Riskin is Assistant Professor of Economics at Columbia University.

Robert A. Scalapino is Professor of Political Science at the University of California, Berkeley.

Ezra F. Vogel is Professor of Economics and Director of the Center for Chinese Studies at the University of Michigan.

Publisher: U OF M CENTER FOR CHINESE STUDIES