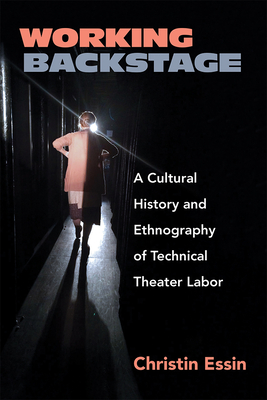 Working Backstage illuminates the work of New York City’s theater technicians, shining a light on the essential contributions of unionized stagehands, carpenters, electricians, sound engineers, properties artisans, wardrobe crews, makeup artists, and child guardians. Too-often dismissed or misunderstood as mere functionaries, these technicians are deeply engaged in creative problem-solving and perform collaborative, intricate choreographed work that parallels the performances of actors, singers, and dancers onstage. Although their contributions have fueled the Broadway machine, their contributions have been left out of most theater histories.

Theater historian Christin Essin offers clear and evocative descriptions of this invaluable labor, based on her archival research and interviews with more than 100 backstage technicians, members of the New York locals of the International Alliance of Theatrical Stage Employees. A former theater technician herself, Essin provides readers with an insider’s view of the Broadway stage, from the suspended lighting bridge of electricians operating followspots for A Chorus Line; the automation deck where carpenters move the massive scenic towers for Newsies; the makeup process in the dressing room for The Lion King; the offstage wings of Matilda the Musical, where guardians guide child actors to entrances and exits. Working Backstage makes an significant contribution to theater studies and also to labor studies, exploring the politics of the unions that serve backstage professionals, protecting their rights and insuring safe working conditions. Illuminating the history of this typically hidden workforce, the book provides uncommon insights into the business of Broadway and its backstage working relationships among cast and crew members.