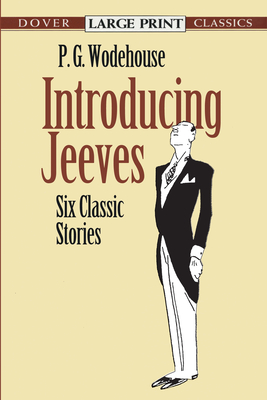 British humorist P. G. Wodehouse (1881-1975) charmed generations of readers with such whimsical characters as the Honourable Bertie Wooster -- a deliciously dim aristocrat -- and Jeeves, his imperturbable manservant. This entertaining collection presents six entertaining tales featuring the unflappable valet, among them Leave It to Jeeves, Jeeves Takes Charge, and Jeeves in the Springtime. Sure to seduce longtime Wodehouse fans, these clever send-ups of the idle rich in Edwardian England will also tickle the funny bones of new readers. Large print edition.

In the course of his long career, Sir Pelham Grenville Wodehouse (1881-1975) published more than 90 books, 40 plays, and 200 short stories, in addition to other writings. A century after their debut, his comic duo of aristocratic Bertie Wooster and all-knowing manservant Jeeves rank among Wodehouse's most popular creations.