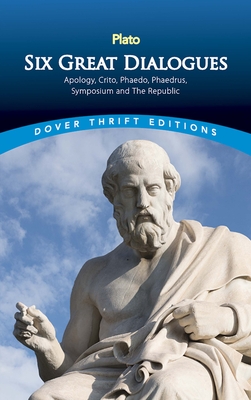 By  Plato , Translator  Benjamin Jowett
Paperback
$ 7.00
Likely On Our Shelves

Plato's brilliant dialogues, written in the fourth century B.C., rank among Western civilization's most important philosophical works. Presented as a series of probing conversations between Socrates and his students and fellow citizens, they form a magnificent dialectical quest that examines enduring political, ethical, metaphysical, and epistemological issues.
Here, in one inexpensive edition, are six of Plato's remarkable and revelatory dialogues, each translated by distinguished classical scholar Benjamin Jowett. Apology defends the integrity of Socrates' teachings. Crito discusses respect for the law. Phaedo considers death and the immortality of the soul. Phaedrus explores the psychology of love. Symposium reflects on the ultimate manifestation of the love that controls the world, and The Republic ponders society and the philosopher's role within it. Stimulating, dramatic, and always relevant, these dialogues have profoundly influenced the history of intellectual thought, and offer crucial insight into mystical, aesthetic, and other aspects of Platonic doctrine.