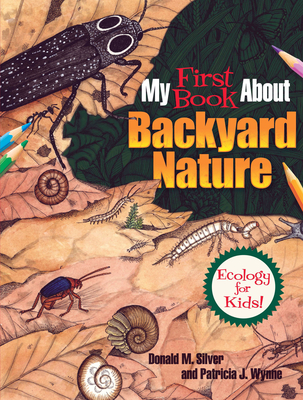 Winner of a 2017 Moonbeam Children's Book Award Silver Medal
Millions of creatures live in the backyard: beetles and bugs; butterflies and birds; turtles and toads; ants, earthworms, and tiny animals hidden in the grass or deep in the soil. These creatures lead busy lives, climbing trees, crawling over rocks, searching for food, and building nests. With this book's 46 pages of illustrations -- each accompanied by fact-filled captions -- kids can combine the fun of coloring with the fascination of discovering how all kinds of living creatures are linked together.
Realistic pictures to color depict the backyard through all four seasons and during the day and night. The captions identify different types of trees, flowers, and bushes; butterflies, moths, and birds; reptiles and amphibians; and many other plants and animals. Suitable for ages 8-11, this informative coloring book recaptures the excitement of the natural world that's right outside the back door.

An accomplished science and nature illustrator, Patricia J. Wynne is the recipient of the 2008 Theodor Seuss Geisel Honor and has won awards from Parenting Magazine, the John Burroughs Association, and the National Science Teachers Association. Patricia's artwork has appeared in galleries, magazines, newspapers, and more than 100 books for both children and adults, including numerous successful Dover titles on science and nature. Trained as a research scientist, Donald M. Silver has written more than 80 books for students of all ages and for teachers, including his One Small Square series, which takes a close-up look at plants and animals. His numerous awards include the Children's Science Writing Award in Physics and Astronomy from the American Institute of Physicists. He and Patricia J. Wynne have co-authored several popular Dover titles on science and nature, including My First Book About Outer Space, My First Book About the Body, and My First Book About the Brain.