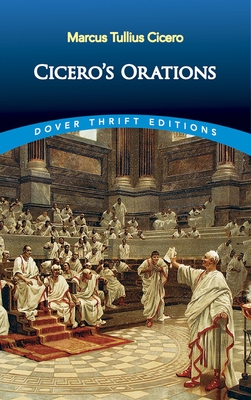 The greatest orator of the late Roman Republic, Marcus Tullius Cicero (106-43 B.C.), influenced the course of European letters for centuries after his death. Through his writings, Renaissance and Enlightenment scholars encountered the riches of Classical rhetoric and philosophy. The elegance of his style, his skill and erudition, his worldly wisdom, and his profound humanity made Cicero a model for latter-day thinkers and keep his works ever relevant.
This collection presents examples of rhetoric from throughout the ancient Roman's illustrious career. Selections include a series of famous speeches delivered during Cicero's term as consul which thwarted the Catiline conspiracy to overthrow the Republic -- but led to his own prosecution and exile. The compilation concludes with the bold orations delivered in defiance of Marc Anthony, which sealed Cicero's doom.

Roman politician, lawyer, and philosopher Marcus Tullius Cicero (106-43 B.C.) is famed for his oratory skills. His life coincided with the civil wars that ended the Roman republic, and his writings provide a valuable source of information on the period. Cicero was assassinated in the political struggles that followed the death of Julius Caesar, and his works exercised considerable influence on the development of European political thought and philosophy.