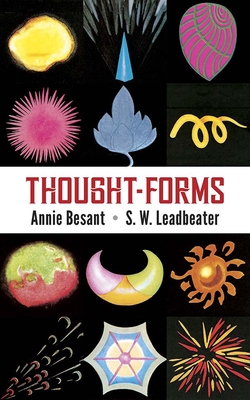 Wassily Kandinsky, Piet Mondrian, and other modern artists were profoundly influenced by this classic of the theosophical tradition, which explores the concept of what thoughts "look" like. Written by a pair of prominent theosophists, it provides a way to visualize the invisible realms within and around us. These simple, clearly expressed, and well-illustrated discussions address the meaning of color, thought forms built by music, and related subjects.
British social reformer Annie Besant wrote numerous books and articles that are still widely considered the best expositions of theosophical belief. She co-authored this treatise with C. W. Leadbeater, a former Anglican priest who converted to theosophy. Besant characterized the purpose of Thought Forms as "as a striking moral lesson to every reader, making him realize the nature and power of his thoughts, acting as a stimulus to the noble and a curb to the base.

British social reformer Annie Besant (1847-1933) wrote numerous books and articles that are still widely considered the best expositions of Theosophical belief. She served as international president of the Theosophical Society from 1907 until her death and was active in the Indian independence movement. C. W. Leadbeater (c.1854-1934) was a priest in the Church of England who converted to Theosophy. A highly developed clairvoyant, he was active in lecturing and writing about Theosophy.