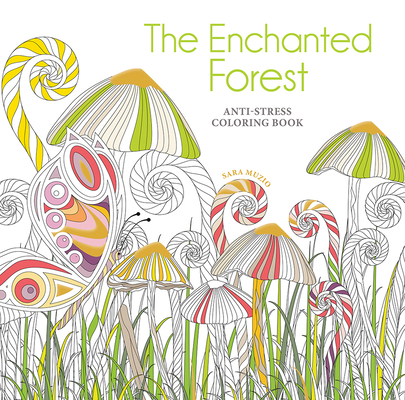 Immerse yourself in the beauty of nature with 46 stunning and soothing one- and two-page illustrations in this anti-stress adult coloring book. Each richly detailed scene promotes mindfulness and tranquility by featuring an elaborate combination of stems, leaves, flowers, buds, mushrooms, insects, birds, and other organic elements that make up the bustling life of a forest in miniature. The lush packaging features gold foil on the cover and fold-out flaps.

Sara Muzio has over ten years of experience working in graphic design and illustration. In 2002, after earning a degree in Medical Illustration, she began working for small graphic design studios and in 2004 she became the scientific illustrator for Lumen Edizioni, where she completed a postgraduate course on publishing and advertising graphics. From 2005 to 2011, she worked as a freelance graphic designer for private clients as well as public entities and publishing houses. From 2011 to 2013, she was the graphic packaging editor for Sambonet Paderno Industrie S.p.A. She currently works as an illustrator and freelance graphic designer.