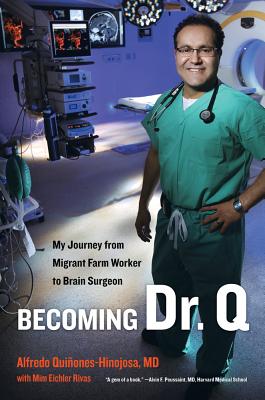 Today he is known as Dr. Q, an internationally renowned neurosurgeon and neuroscientist who leads cutting-edge research to cure brain cancer. But not too long ago, he was Freddy, a nineteen-year-old undocumented migrant worker toiling in the tomato fields of central California. In this gripping memoir, Alfredo Quiñones-Hinojosa tells his amazing life story—from his impoverished childhood in the tiny village of Palaco, Mexico, to his harrowing border crossing and his transformation from illegal immigrant to American citizen and gifted student at the University of California at Berkeley and at Harvard Medical School. Packed with adventure and adversity—including a few terrifying brushes with death—Becoming Dr. Q is a testament to persistence, hard work, the power of hope and imagination, and the pursuit of excellence. It’s also a story about the importance of family, of mentors, and of giving people a chance.

Alfredo Quiñones-Hinojosa, MD, is an Associate Professor of Neurosurgery and Oncology at Johns Hopkins University. In addition to directing the Brain Tumor Surgery Program, Dr. Q leads the Brain Tumor Stem Cell Laboratory. Named one of the one hundred most influential Hispanics in 2008, Dr. Q was also selected by Popular Science magazine as one of their Annual Brilliant Ten. Dr. Q has extensive publications in the medical field and is the lead editor for the upcoming edition of Schmidek and Sweet’s Operative Neurosurgical Techniques.