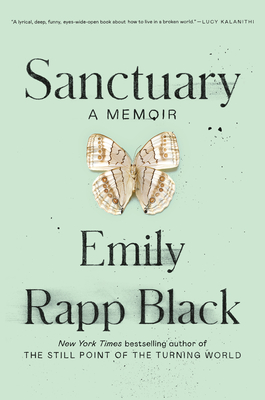 By  Emily Rapp Black
Hardcover
$ 27.00
Out of Stock In Store (Click to Order)

“[An] often beautiful jewel of a book . . . Black’s power as a writer means she can take us with her to places that normally our minds would refuse to go.”—The New York Times Book Review (Editors’ Choice)

From the New York Times bestselling author of The Still Point of the Turning World comes an incisive memoir about how she came to question and redefine the concept of resilience after the trauma of her first child’s death.

“Congratulations on the resurrection of your life,” a colleague wrote to Emily Rapp Black when she announced the birth of her second child. The line made Rapp Black pause. Her first child, a boy named Ronan, had died from Tay-Sachs disease before he turned three years old, an experience she wrote about in her second book, The Still Point of the Turning World. Since that time, her life had changed utterly: She left the marriage that fractured under the terrible weight of her son’s illness, got remarried to a man who she fell in love with while her son was dying, had a flourishing career, and gave birth to a healthy baby girl. But she rejected the idea that she was leaving her old life behind—that she had, in the manner of the mythical phoenix, risen from the ashes and been reborn into a new story, when she still carried so much of her old story with her. More to the point, she wanted to carry it with her. Everyone she met told her she was resilient, strong, courageous in ways they didn’t think they could be. But what did those words mean, really?

This book is an attempt to unpack the various notions of resilience that we carry as a culture. Drawing on contemporary psychology, neurology, etymology, literature, art, and self-help, Emily Rapp Black shows how we need a more complex understanding of this concept when applied to stories of loss and healing and overcoming the odds, knowing that we may be asked to rebuild and reimagine our lives at any moment, and often when we least expect it. Interwoven with lyrical, unforgettable personal vignettes from her life as a mother, wife, daughter, friend, and teacher, Rapp Black creates a stunning tapestry that is full of wisdom and insight.

Emily Rapp Black is the author of Poster Child: A Memoir and The Still Point of the Turning World. A former Fulbright scholar, she was educated at Harvard University, Trinity College-Dublin, Saint Olaf College, and the University of Texas-Austin, where she was a James A. Michener Fellow. A recent Guggenheim Fellowship Recipient, she has received awards and fellowships from the Rona Jaffe Foundation, the Jentel Arts Foundation, the Corporation of Yaddo, the Fine Arts Work Center in Provincetown, Fundación Valparaíso, and Bucknell University, where she was the Philip Roth Writer-in-Residence. Her work has appeared in Vogue, The New York Times, Salon, Slate, Time, The Boston Globe, The Wall Street Journal, Psychology Today, O: The Oprah Magazine, Los Angeles Times, and many others. She is a regular contributor to The New York Times Book Review and frequently publishes scholarly work in the fields of disability studies, bioethics, and theological studies. She is currently associate professor of creative writing at the University of California-Riverside, where she also teaches medical narratives in the School of Medicine.