Sing a Song: How Lift Every Voice and Sing Inspired Generations 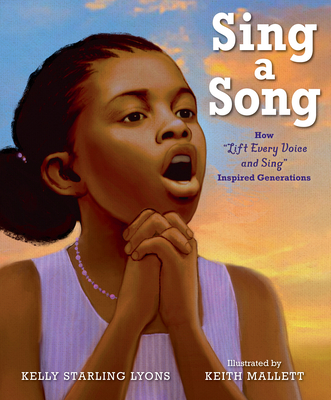 Sing a Song: How Lift Every Voice and Sing Inspired Generations

By  Kelly Starling Lyons , Illustrated By  Keith Mallett
$ 17.99
Out of Stock In Store (Click to Order)

"Lyons delivers the history of a song that has inspired generations of African-Americans to persist and resist in the face of racism and systemic oppression. . . . A heartfelt history of a historic anthem."--Publishers Weekly

In Jacksonville, Florida, two brothers, one of them the principal of a segregated, all-black school, wrote the song "Lift Every Voice and Sing" so his students could sing it for a tribute to Abraham Lincoln's birthday in 1900. From that moment on, the song has provided inspiration and solace for generations of Black families. Mothers and fathers passed it on to their children who sang it to their children and grandchildren. Known as the Black National Anthem, it has been sung during major moments of the Civil Rights Movement and at family gatherings and college graduations.

Inspired by this song's enduring significance, Kelly Starling Lyons and Keith Mallett tell a story about the generations of families who gained hope and strength from the song's inspiring words.

Kelly Starling Lyons (kellystarlinglyons.com) is the author of the picture books Hope's Gift, Tea Cakes for Tosh, and Ellen's Broom, as well as the Jada Jones chapter book series. Her articles and essays have appeared in many publications, including Ebony magazine, the News & Observer, the Christian Science Monitor, and books in the Chicken Soup for the Soul series. She lives in North Carolina with her husband and daughter and son.

Keith Mallett (keithmallett.com) also illustrated Take a Picture of Me, James VanDerZee and How Jelly Roll Morton Invented Jazz. He studied art at Hunter College in New York City, and was the in-house artist for Frontline Art Publishers for fifteen years. His work was commissioned to celebrate the 50th anniversary of Jackie Robinson's historic breakthrough into major league baseball, has graced the cover of Chicken Soup for the African American Soul, and has been featured in many movies and TV shows. Both Franklin Mint and Lenox Collections have created collectibles of his work. He lives in La Mesa, California.