Sababa: Fresh, Sunny Flavors From My Israeli Kitchen: A Cookbook 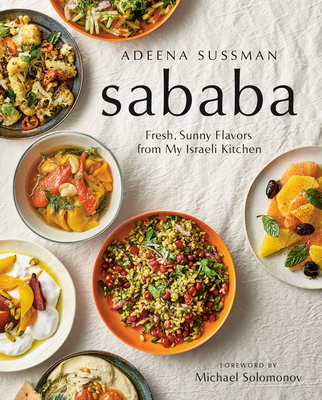 Sababa: Fresh, Sunny Flavors From My Israeli Kitchen: A Cookbook

By  Adeena Sussman , Foreword by  Michael Solomonov
$ 35.00
On Our Shelves Now

"We should all be cooking like Adeena Sussman."
--The Wall Street Journal

"Sababa is a breath of fresh, sunny air."
--The New York Times

In an Israeli cookbook as personal as it is global, Adeena Sussman celebrates the tableau of flavors the region has to offer, in all its staggering and delicious variety

In Hebrew (derived from the original Arabic), sababa means "everything is awesome," and it's this sunny spirit with which the American food writer and expat Adeena Sussman cooks and dreams up meals in her Tel Aviv kitchen. Every morning, Sussman makes her way through the bustling stalls of Shuk Hacarmel, her local market, which sells irresistibly fresh ingredients and tempting snacks--juicy ripe figs and cherries, locally made halvah, addictive street food, and delectable cheeses and olives. In Sababa, Sussman presents 125 recipes for dishes inspired by this culinary wonderland and by the wide-varying influences surrounding her in Israel.

Americans have begun to instinctively crave the spicy, bright flavors of Israeli cuisine, and in this timely cookbook, Sussman shows readers how to use border-crossing kitchen staples-- tahini, sumac, silan (date syrup), harissa, za'atar---to delicious effect, while also introducing more exotic spices and ingredients. From Freekeh and Roasted Grape Salad and Crudo with Cherries and Squeezed Tomatoes, to Schug Marinated Lamb Chops and Tahini Caramel Tart, Sussman's recipes make a riot of fresh tastes accessible and effortless for the home cook. Filled with transporting storytelling, Sababa is the ultimate, everyday guide to the Israeli kitchen.

Adeena Sussman has co-authored eleven cookbooks, including the New York Times #1 bestseller Cravings--and its New York Times bestselling follow-up, Hungry for More--with Chrissy Teigen. She is also the author of Short Stack Editions' Tahini. A lifelong visitor to Israel, she moved there in 2015 after meeting an expat American who has since become her husband. She lives footsteps from Tel Aviv's Carmel Market, where she shops and explores daily, taking inspiration from her adopted country's seasonal and cultural culinary rhythms. She has written about Israeli food for Food & Wine, The Wall Street Journal, Epicurious, Gourmet, and many others.