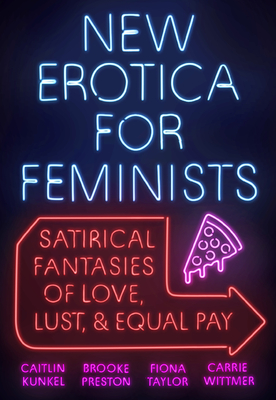 He calls me into his office and closes the door . . . to promote me. He promotes me again and again. I am wild with ecstasy.

Imagine a world where all erotica was written by feminists: Their daydreams include equal pay, a gender-balanced Congress, and Tom Hardy arriving at their doorstep to deliver a fresh case of LaCroix every week.

Both light-hearted and empowering, New Erotica for Feminists—based off of the viral McSweeney's piece of the same name—is a sly, satirical take on all the things that turn feminists on. From a retelling of Adam and Eve to tales of respectful Tinder dates, New Erotica for Feminists answers the question of “What do women really want?” with stories of power, equality, and an immortal Ruth Bader Ginsburg.

Caitlin Kunkel, Brooke Preston, Fiona Taylor, and Carrie Wittmer are comedy writers and satirists whose work has been featured in the New Yorker, McSweeney’s, and many other outlets. Together, they cofounded and edit the website The Belladonna, which responds to today's culture, news, and politics with comedy and satire written by women and nonbinary authors.
www.thebelladonnacomedy.com