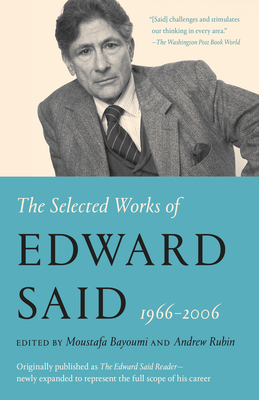 The renowned literary and cultural critic Edward Said was one of our era’s most provocative and important thinkers. This comprehensive collection of his work, expanded from the earlier Edward Said Reader, now draws from across his entire four-decade career, including his posthumously published books, making it a definitive one-volume source.

The Selected Works includes key sections from all of Said’s books, including his groundbreaking Orientalism; his memoir, Out of Place; and his last book, On Late Style. Whether writing of Zionism or Palestinian self-determination, Jane Austen or Yeats, or of music or the media, Said’s uncompromising intelligence casts urgent light on every subject he undertakes. The Selected Works is a joy for the general reader and an indispensable resource for scholars in the many fields that his work has influenced and transformed.

Edward W. Said was born in 1935 in Jerusalem, raised in Jerusalem and Cairo, and educated in the United States, where he attended Princeton (B.A. 1957) and Harvard (M.A. 1960; Ph.D. 1964). In 1963, he began teaching at Columbia University, where he was University Professor of English and Comparative Literature. He died in 2003 in New York City.

He is the author of twenty-two books which have been translated into 35 languages, including Orientalism (1978); The Question of Palestine (1979); Covering Islam (1980); The World, the Text, and the Critic (1983); Culture and Imperialism (1993); Peace and Its Discontents: Essays on Palestine and the Middle East Peace Process (1996); and Out of Place: A Memoir (1999). Besides his academic work, he wrote a twice-monthly column for Al-Hayat and Al-Ahram; was a regular contributor to newspapers in Europe, Asia, and the Middle East; and was the music critic for The Nation.