A Duet for Home 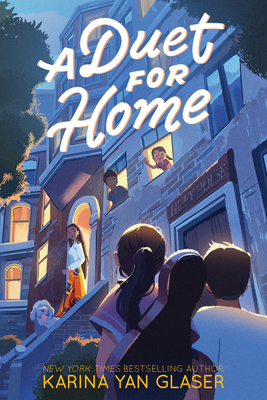 A Duet for Home

By  Karina Yan Glaser
Hardcover
$ 16.99
Out of Stock In Store

From the New York Times bestselling creator of the Vanderbeekers series comes a triumphant tale of friendship, healing, and the power of believing in ourselves told from the perspective of biracial sixth-graders June and Tyrell, two children living in a homeless shelter. As their friendship grows over a shared love of classical music, June and Tyrell confront a new housing policy that puts homeless families in danger.

It's June’s first day at Huey House, and as if losing her home weren’t enough, she also can’t bring her cherished viola inside. Before the accident last year, her dad saved tip money for a year to buy her viola, and she’s not about to give it up now.

Tyrell has been at Huey House for three years and gives June a glimpse of the good things about living there: friendship, hot meals, and a classical musician next door.

Can he and June work together to oppose the government, or will families be forced out of Huey House before they are ready?

Karina Glaser is the New York Times best-selling author of The Vanderbeekers series and A Duet for Home. A former teacher as well as employee of New York City's largest provider of transitional housing for the homeless, Karina is now a contributing editor at Book Riot. Karina lives in Harlem, New York City, with her husband, two children, and an assortment of rescue animals. One of her proudest achievements is raising two kids who can’t go anywhere without a book. Visit her at karinaglaser.com