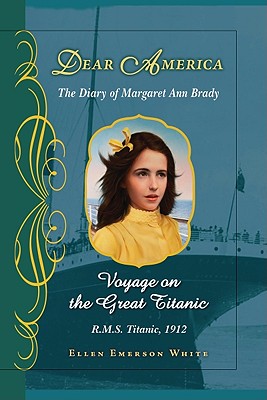 One of the most popular Dear America diaries of all time, Ellen Emerson White's bestselling VOYAGE ON THE GREAT TITANIC is now back in print with a gorgeous new package!

Five years ago, Margaret Ann Brady's older brother left her in the care of an orphanage and immigrated to America. When the orphanage receives an unusual request from an American woman looking for a traveling companion, Margaret's teachers agree that she is the perfect candidate to accompany Mrs. Carstairs on the TITANIC, so that once Margaret arrives in New York she will be free to join her brother in Boston. But the TITANIC is destined for tragedy, and Margaret's journey is thrown into a frozen nightmare when the ship collides with an iceberg.

Ellen Emerson White has written several critically acclaimed novels for young adults, among them THE PRESIDENT'S DAUGHTER, and its follow-up, LONG MAY SHE REIGN, as well as LIFE WITHOUT FRIENDS and LONG LIVE THE QUEEN. Ms. White graduated from Tufts University with a BA in English. She also studied fire science and police science at John Jay College in New York City and is certified to teach high school English. Her interests include the Vietnam War, cooking, downhill skiing, the Boston Red Sox, the New England Patriots, jazz, reading, politics, and pets.