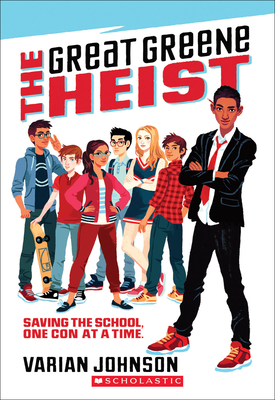 By  Varian Johnson
Paperback
$ 6.99
Out of Stock In Store

Saving the school -- one con at a time. (And in paperback!)

"A political heist page-turner set in middle school? Is that even possible? Varian Johnson shows us how it's done." - Gordon Korman, author of SWINDLE "Do yourself a favor and start reading immediately." - Rebecca Stead, author of WHEN YOU REACH ME Jackson Greene swears he's given up scheming. Then school bully Keith Sinclair announces he's running for Student Council president, against Jackson's former friend Gaby de la Cruz. Gaby wants Jackson to stay out of it -- but he knows Keith has "connections" to the principal, which could win him the presidency no matter the vote count. So Jackson assembles a crack team: Hashemi Larijani, tech genius. Victor Cho, bankroll. Megan Feldman, science goddess. Charlie de la Cruz, reporter. Together they devise a plan that will take down Keith, win Gaby's respect, and make sure the election is done right. If they can pull it off, it will be remembered as the school's greatest con ever -- one worthy of the name THE GREAT GREENE HEIST.

Varian Johnson is the author of several novels for children and young adults, including The Parker Inheritance, which won both Coretta Scott King Author Honor and Boston Globe/Horn Book Honor awards, The Great Greene Heist, an ALA Notable Children’s book, a Kirkus Reviews Best Book, and a Texas Library Association Lone Star List selection, and the graphic novel Twins co-created with Shannon Wright, an NPR Best Book. He lives with his family near Austin, Texas. You can visit him on the web at varianjohnson.com and @varianjohnson.