Rise of the Earth Dragon: A Branches Book (Dragon Masters #1) 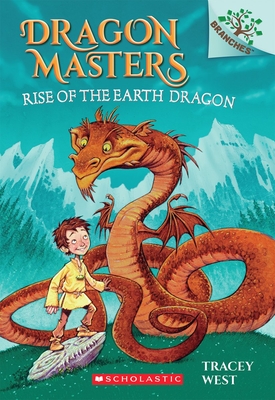 Rise of the Earth Dragon: A Branches Book (Dragon Masters #1)

By  Tracey West , Illustrated By  Graham Howells
Paperback
$ 5.99
On Our Shelves Now

The New York Times bestselling Dragon Masters series is "How to Train Your Dragon" meets the Dragon Slayers' Academy, and it's perfect for newly independent readers!

Pick a book. Grow a reader. This series is part of Scholastic's early chapter book line called Branches, which is aimed at newly independent readers. With easy-to-read text, high-interest content, fast-paced plots, and illustrations on every page, these books will boost reading confidence and stamina. Branches books help readers grow! DRAGON MASTERS has it all! Dragons, a Dragon Stone, a king, a wizard, and magic! In the first book in this fully-illustrated series, 8-year old Drake is snatched up by King Roland's soldier and taken to the castle. He is to be trained as a Dragon Master. At the castle, he is joined by three other young Dragon Masters-in-training: Ana, Rori, and Bo. The Dragon Masters must learn how to connect with and train their dragons--and they must also uncover their dragons' special powers. Does Drake have what it takes to be a Dragon Master? What is his dragon's special power?

Graham Howells is a children's book author and illustrator. He also produces artwork for games, television, and film. Howells won the 2009 English-Language Award for his book, Merlin's Magical Creatures.
Tracey West has written more than 300 books for children and young adults, including the New York Times bestselling Dragon Masters series, the Pixie Tricks series, and the Hiro's Quest series. She has also appeared on the New York Times bestseller list as author of the Pokémon chapter book adaptations. Tracey lives with her family in New York State's western Catskills. She can be found on Twitter and Instagram at @TraceyWestBooks and on Facebook at @AuthorTraceyWest.