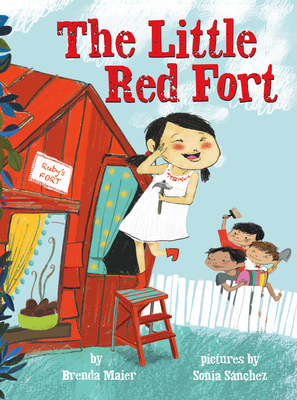 A spunky, feminist adaptation of the timeless favorite, The Little Red Hen, sure to appeal to fans of Rosie Revere, Engineer.

A Chicago Public Library Best Book of the Year* "The Little Red Hen gets an appealing girl-power update...Young makers of all genders will be inspired." --The Bulletin of the Center for Children's Books, starred reviewRuby's mind is always full of ideas.One day, she finds some old boards and decides to build something. She invites her brothers to help, but they just laugh and tell her she doesn't know how to build."Then I'll learn," she says.And she does!When she creates a dazzling fort that they all want to play in, it is Ruby who has the last laugh.With sprightly text and winsome pictures, this modern spin on the timeless favorite The Little Red Hen celebrates the pluck and ingenuity of young creators everywhere!

Brenda Maier's debut picture book, The Little Red Fort, was called "inspired" by the Bulletin of the Center for Children's Books in a starred review, and was named a Chicago Public Library Best Book of the Year, a Bank Street College Best Children's Book of the Year, and winner of One Book for Colorado. Brenda is a public school teacher and a gifted education specialist. When she isn't writing, Brenda enjoys traveling with her family, baking peanut-free cookies, and watching her five children build amazing creations from found materials. She lives near Tulsa, Oklahoma. You can learn more about her work at brendamaier.com.
Sonia Sánchez paints with both traditional and digital brushes, using layers of texture in her work to evoke emotion and movement. She is the illustrator of The Little Red Fort by Brenda Maier; The Wonderful Habits of Rabbits and The Curious Cares of Bears, both by Douglas Florian; and Sister Day! by Lisa Mantchev. Sonia lives with her husband and son and a sleepyhead cat in a blue house near the Mediterranean Sea on the eastern coast of Spain.