City of Saints: A Pilgrimage to John Paul II's Kraków 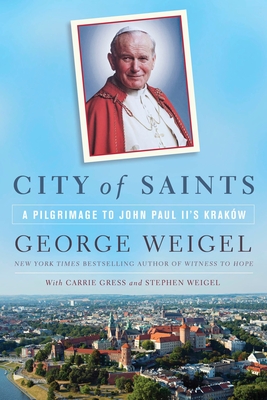 City of Saints: A Pilgrimage to John Paul II's Kraków

“Karol Wojtyła, Pope John Paul II, was a man whose life was the expression of a richly textured and multidimensional soul. The many layers of that soul took on their first, mature form in Kraków.” – George Weigel

In this beautifully illustrated spiritual travelogue, New York Times bestselling author George Weigel leads readers through the historic streets of Kraków, Poland, introducing one of the world’s great cities through the life of one of the most influential Catholic leaders of all time.

“To follow Karol Wojtyła through Kraków is to follow an itinerary of sanctity while learning the story of a city.” Weigel writes. “Thus, in what follows, the story of Karol Wojtyła, St. John Paul II, and the story of Kraków are interwoven in a chronological pilgrimage through the life of a saint that reveals, at the same time, the dramatic history and majestic culture of a city where a boy grew into a man, priest, a bishop—and an apostle to the world.”

With stunning photographs by Stephen Weigel and notes on the city’s remarkable fabric by Carrie Gress, City of Saints offers an in-depth look at a man and a city that made an indelible impression on the life and thought of the Catholic Church and the 21st century world.

GEORGE WEIGEL, Distinguished Senior Fellow of Washington’s Ethics and Public Policy Center, is a Catholic theologian and one of the world’s foremost authorities on the Catholic Church. Senior Vatican Analyst for NBC News and a nationally syndicated columnist, Weigel is the author of more than twenty books, including the New York Times bestseller Witness to Hope: The Biography of Pope John Paul II. His work has been translated into more than a dozen languages.