Chasing the Modern: The Twentieth-Century Life of Poet Xu Zhimo 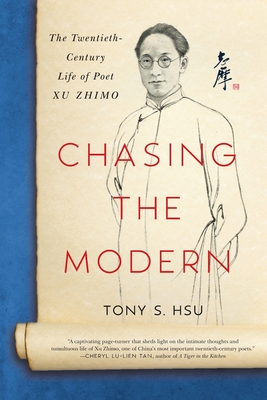 Chasing the Modern: The Twentieth-Century Life of Poet Xu Zhimo

At the height of his literary prowess, Xu Zhimo was the most famous living poet in all of China. With his round spectacles and aristocratic profile, Xu had a face that became as iconic as his poetry. During his short life, he claimed an illustrious place in the literary canon, redefining Chinese poetry and leading literature into the modern era. But while the brilliant and charismatic Xu may have seemed to live a charmed existence, he also faced near poverty, profound heartbreak, the opium addiction of his second wife, and a fiery death at age thirty-five. In this lyrical and engaging biography, Xu's story is poignantly told by his grandson, Tony Hsu.

Born in 1897, Xu came of age during the early twentieth century, a period when China was struggling to find its own identity-an era of nation building, violent political revolutions, and passionate cultural exchange with the West. In Chasing the Modern, we follow the odyssey of Xu, who at twenty-one, boards a ship from Shanghai to America, leaving behind his family-the dutiful and intelligent Zhang Youyi, the wife he had wed in an arranged marriage and their infant son-and his beloved homeland to pursue a Western education. In America, along with the other elite young men of his generation, he studies at Columbia University in New York. Shifting allegiances and crossing the Atlantic to continue his education in England, Xu then joins the avant-garde philosophers and writers at the storied King's College, Cambridge University, and socializes with the London literati, exchanging ideas, bons mots and champagne toasts with the Bloomsbury Group.

It is at Cambridge that Xu experiences an awakening-to literature, to love, and to life itself-ultimately choosing to devote himself to poetry, pursuing the first divorce in Chinese history, and chasing an eternal love with the entrancing, intelligent women he believes embody modern ideals, among them Lin Huiyin, who would ultimately rise as China's first female architect, and Lu Xiaoman, a lauded opera singer, painter and author. Returning to China after four years abroad, Xu rises to national fame, first as the interpreter for Nobel Laureate Rabindranath Tagore, then as a visionary poet, and finally, and perhaps most importantly, as a symbol of early twentieth century China. A man who defined his era, Xu made choices in life and love that surprised and sometimes shocked a nation that was watching-and following-his every move.