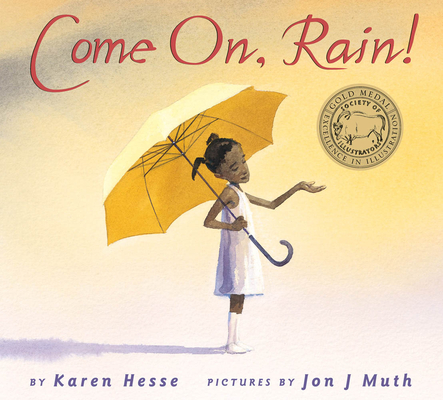 "Come on, rain!" Tess pleads to the sky as listless vines and parched plants droop in the endless heat. Up and down the block, cats pant while heat wavers off tar patches in the broiling alleyway. More than anything, Tess hopes for rain. And when it comes, she and her friends are ready for a surprising joyous celebration....Through exquisite language and acute observation, Newbery medalist Karen Hesse recreates the glorious experience of a quenching rainstorm on a sweltering summer day. Jon J Muth's masterful and lyrical watercolors perfectly reflect the spirit of the text.

Karen Hesse is the award-winning and critically acclaimed author of many books for children. Her titles include Witness, The Cats in Krasinski Square, and the Newbery Medal winner Out of the Dust, among many others. She lives in Vermont with her husband and two teenaged daughters.
Jon J Muth is beloved all over the world for his seven books featuring Stillwater the Panda, whose love and balanced approach to life always serve to make the world a better place for his young friends. Muth’s many enchanting picture books include his Caldecott Honor Book Zen Shorts, Addy’s Cup of Sugar, Stone Soup, and The Three Questions, which the New York Times Book Review called "quietly life-changing." His books have been translated into more than 23 languages and are cherished by readers of all ages. Muth draws inspiration from his life-long interest in Asian Studies, including tai chi chuan, sumi ink drawing, and chado, "the way of tea." Muth is also renowned in the world of graphic novels. He won an Eisner Award for his paintings in the graphic novel, The Mystery Play by Grant Morrison. He’s partnered with Neil Gaiman on The Sandman: The Wake, Walter and Louise Simonson, and Kent Williams on Havoc & Wolverine: Meltdown, J. M. DeMatteis on Moonshadow and Silver Surfer, and with Stanislaw Lem on The Seventh Voyage which was nominated for an Eisner Award for Best Adaptation in Another Medium. He lives in New York State with his wife and their four children.