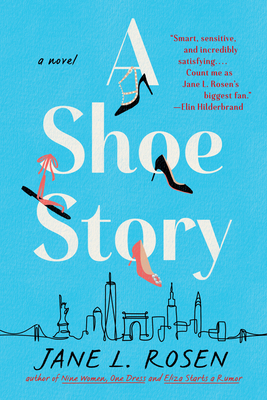 "Jane L. Rosen has a forever fan in me."—Emily Henry

A young woman has one month and a closetful of shoes to discover the future she thought she'd lost in this captivating new novel from the author of Eliza Starts a Rumor and Nine Women, One Dress.

Esme Nash is eager to leave her small town and begin her carefully planned post-grad life: a move to New York City, an apartment with her loving college boyfriend, and a fancy job at an art gallery. But when tragedy strikes, instead of heading to Manhattan, she returns home to care for her ailing father, leaving every bit of her dream behind.

Seven trying years later, Esme is offered a dog-sitting job in Greenwich Village by a mysterious stranger, giving her access to all of her long-buried hopes and dreams—as well as to an epic collection of designer shoes. Esme jumps at a second chance to step into the future she's sure was meant to be hers.

As she retraces her steps, one pair of borrowed shoes at a time, making new friends and reconnecting with her old love, Esme tries on versions of herself she didn’t know existed. But the hazy August days and warm summer nights pass too quickly, and Esme must decide how much of the life she imagined still fits, and what—and who—is on the road ahead of her.

Jane L. Rosen is an author and screenwriter whose critically acclaimed first novel, Nine Women, One Dress, has been translated into ten languages. She lives in New York City and on Fire Island with her husband and three daughters.