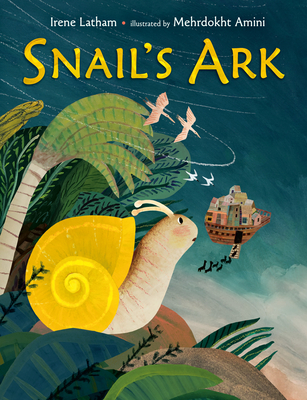 By  Irene Latham , Illustrated By  Mehrdokht Amini
$ 18.99
Pre-Order (Not Yet Published)

In this gorgeously depicted and timeless story of friendship and perseverance, two snails journey to the ark.

When Esther woke she knew something curious was happening—a storm was in the air. Not just any storm but the biggest storm the world had ever seen. In lyrical and rhythmic text, with a common refrain of hurry hurry, Esther makes her way to the ark, encountering other animals along the way. Joys, troubles, and journeys are best shared, and so Esther finds her friend Solomon and together—with the help of a small miracle—they find a way to safety.

This heartwarming picture book celebrates the importance of community and helping others, featuring two brave snails who embark on the journey of a lifetime.

Irene Latham is a grateful creator of many novels, poetry collections, and picture books, including the co-authored Can I Touch Your Hair? Poems of Race, Mistakes, and Friendship, which earned a Charlotte Huck Honor, and The Cat Man of Aleppo, which won a Caldecott Honor. Irene lives on a lake in rural Alabama.


Mehrdokht Amini is an Iranian British children’s book illustrator living in London. She has a degree in graphic design from Tehran University, where she worked for children’s magazines and books while still a student. Her picture book Golden Domes and Silver Lanterns (written by Hena Khan) was selected for the 2013 ALSC Notable Children’s Books list. In 2016, Chicken in the Kitchen won Best Book at the Children’s Africana Book Awards, was put on the White Ravens Honour List, and was nominated for the Kate Greenaway Medal.