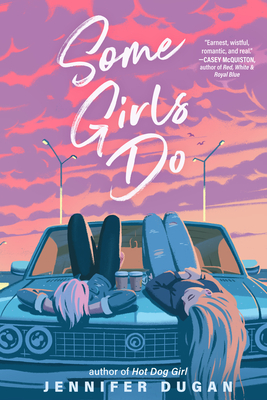 By  Jennifer Dugan
Hardcover
$ 17.99
Out of Stock In Store (Available to Order)

In this YA contemporary queer romance from the author of Hot Dog Girl, an openly gay track star falls for a closeted, bisexual teen beauty queen with a penchant for fixing up old cars.

Morgan, an elite track athlete, is forced to transfer high schools late in her senior year after it turns out being queer is against her private Catholic school's code of conduct. There, she meets Ruby, who has two hobbies: tinkering with her baby blue 1970 Ford Torino and competing in local beauty pageants, the latter to live out the dreams of her overbearing mother. The two are drawn to each other and can't deny their growing feelings. But while Morgan--out and proud, and determined to have a fresh start--doesn't want to have to keep their budding relationship a secret, Ruby isn't ready to come out yet. With each girl on a different path toward living her truth, can they go the distance together?

Jennifer Dugan is a writer, a geek, and a romantic who writes the kinds of stories she wishes she'd had growing up. Her debut young adult novel, Hot Dog Girl, was called "a great, fizzy rom-com" by Entertainment Weekly, and Booklist called her second novel, Verona Comics, "a smart, compassionate love story to and for teens." The writer/creator of two indie comics, she lives in upstate New York with her family, her dogs, her beloved bearded dragon, and an evil cat that is no doubt planning to take over the world. You can visit Jennifer at JLDugan.com or follow her on Twitter and Instagram @JL_Dugan.