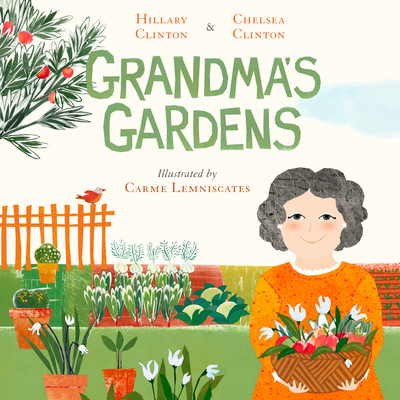 From mother-daughter team Hillary Clinton and Chelsea Clinton comes a celebration of family, tradition and discovery, and an ode to mothers, grandmothers and the children they love.

Grandma Dorothy shared her love of gardens with her daughter, Hillary, and her granddaughter, Chelsea. She taught them that gardens are magical places to learn, exciting spaces for discovery, quiet spots to spend time with family and beautiful areas to share stories and celebrate special occasions. But most of all, she taught them that in her gardens, her love grew and blossomed.

In this inspiring and heartwarming mother-daughter story, Hillary Clinton and Chelsea Clinton team up to show readers how sharing the things we love with the people we love can create powerful, everlasting bonds between generations.

"A deeply affectionate tribute to the bounty of nature and the love of gardening." --Publishers Weekly

"Filled with mindfulness, the story inspires children to reflect on family and keep memories alive." --Booklist

Hillary Clinton is the first woman in US history to become the presidential nominee of a major political party, in 2016. She served as the sixty-seventh secretary of state--from January 21, 2009, until February 1, 2013--after nearly four decades in public service advocating on behalf of children and families as an attorney, first lady and senator. She is the author of It Takes a Village, What Happened, Hard Choices and Living History. She is a wife, mother and grandmother, and she lives in Chappaqua, New York. You can follow Hillary Clinton on Twitter @HillaryClinton or on Facebook at facebook.com/hillaryclinton.

Chelsea Clinton is the author of the #1 New York Times bestseller She Persisted: 13 American Women Who Changed the World; She Persisted Around the World: 13 Women Who Changed History; She Persisted in Sports: American Olympians Who Changed the Game; Don't Let Them Disappear: 12 Endangered Species Across the Globe; It's Your World: Get Informed, Get Inspired & Get Going!; Start Now!: You Can Make a Difference; with Hillary Clinton, Grandma's Gardens and Gutsy Women; and, with Devi Sridhar, Governing Global Health: Who Runs the World and Why? She is also the Vice Chair of the Clinton Foundation, where she works on many initiatives, including those that help empower the next generation of leaders. She lives in New York City with her husband, Marc, their children and their dog, Soren. You can follow Chelsea Clinton on Twitter @ChelseaClinton or on Facebook at facebook.com/chelseaclinton.

Carme Lemniscates (lemniscates.com) is the author, illustrator and designer of several critically acclaimed children's books, including Trees and Birds (Candlewick Studio) and El jardín mágico (Ekaré), for which she won the 2017 SCBWI Crystal Kite Award. She has also illustrated Jennifer Adams's I Am a Warrior Goddess (Sounds True) and Kate Coombs's BabyLit Little Poets board book series (Gibbs Smith). She is the founder of Lemniscates Studio.

Return of the Thief (Queen's Thief #6)

Dog Man: Grime and Punishment: From the Creator of Captain Underpants (Dog Man #9)

Stamped: Racism, Antiracism, and You: A Remix of the National Book Award-winning Stamped from the Beginning

The Snowy Day Board Book

This Book Is Anti-Racist: 20 Lessons on How to Wake Up, Take Action, and Do The Work (Empower the Future #1)

The Ballad of Songbirds and Snakes (A Hunger Games Novel)