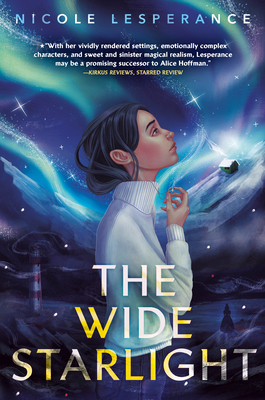 By  Nicole Lesperance
Paperback
$ 10.99
Out of Stock In Store

The Hazel Wood meets The Astonishing Color of After in this dreamy, atmospheric novel that follows sixteen-year-old Eli as she tries to remember what truly happened the night her mother disappeared off a frozen fjord in Norway under the Northern Lights.

Never whistle at the Northern Lights, the legend goes, or they'll sweep down from the sky and carry you away.

Sixteen-year-old Eline Davis knows it's true. She was there ten years ago, on a frozen fjord in Svalbard, Norway, the night her mother whistled at the lights and then vanished.

Now, Eli lives an ordinary life with her dad on Cape Cod. But when the Northern Lights are visible over the Cape for just one night, she can't resist the possibility of seeing her mother again. So she whistles--and it works. Her mother appears, with snowy hair, frosty fingertips and a hazy story of where she's been all these years. And she doesn't return alone.

Along with Eli's mother's reappearance come strange, impossible things. Narwhals swimming in Cape Cod Bay, meteorites landing in Eli's yard, and three shadowy princesses with ominous messages. It's all too much, too fast, and Eli pushes her mother away. She disappears again--but this time, she leaves behind a note that will send Eli on a journey across continents, to the northern tip of the world:

Find me where I left you.

Nicole Lesperance grew up on Cape Cod and graduated from Wesleyan University. She spent a few years in London and now lives near Boston with her husband, two kids, and two rambunctious black cats. She writes YA and middle grade books. Follow her on Twitter @niclesperance or visit her online at NicoleLesperance.com.