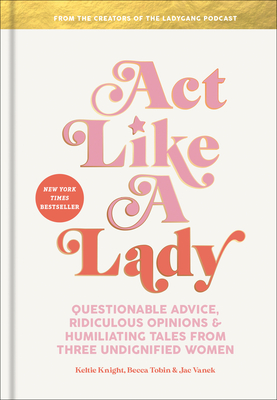 NEW YORK TIMES BESTSELLER • The hosts of the popular podcast and E! show LadyGang offer a relatable, empowering, and hilarious take on being unapologetically yourself (even if that's not always your best self) in a manifesto that redefines womanhood for the twenty-first-century lady.

If you're tired of being bombarded with the curated perfection on social media and you're starving for something raw, honest, and a little bit messy, welcome to the LadyGang. Keltie, Becca, and Jac are here to clear away the bullshit and give you the confidence to live your best lady life.

Unabashedly sincere, clever, and full of questionable advice, Act Like a Lady explores the complexities surrounding topics like body image, breakups, navigating a career, and adult friendships through their own embarrassing experiences. The LadyGang has your back with essays like "Maybe She's Born with It, Maybe It's Photoshop" and "If You're Happy and You Know It, Thank Your Ex." You'll learn there's a million different ways to be a lady--and that includes accidentally farting during sex or having the guts to tell your friend she's being a selfish assh*le. No matter what you're going through, you'll find a space to bond over the sloppy, heartbreaking, joyous, and often ridiculous realities of womanhood. Nothing is TMI here.

Keltie Knight is an Emmy Award-winning television personality and a host on CBS's Entertainment Tonight. She's appeared on Project Runway and The Talk and as a moderator for Vanity Fair. Known for her quick wit and fearless personality, she's interviewed many of the biggest stars in the world.

Becca Tobin is an actress, singer, dancer, and host who first broke into the pop culture zeitgeist when she landed the role of Kitty on Fox Television's internationally acclaimed show Glee. She has starred in several Hallmark movies. After graduating from the American Musical and Dramatic Academy, she was in Broadway's Rock of Ages and toured with the Trans-Siberian Orchestra.

Jac Vanek is a self-made entrepreneur, CEO, and one of the most powerful fashion and music influencers of her generation. Her unconventional Jac Vanek brand continues to defy long-standing boundaries of the fashion industry, and her sassy graphics and slogans are worn by celebrities and widely known.