The Ghosts of Paris (A Billie Walker Novel #2) 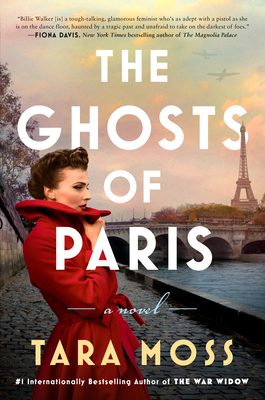 The Ghosts of Paris (A Billie Walker Novel #2)

A thrilling tale of courage and secrets set in postwar London and Paris, in which a search for a missing husband puts investigator and former war reporter Billie Walker on a collision course with an underground network of Nazi criminals

It’s 1947. The world continues to grapple with the fallout of the Second World War, and former war reporter Billie Walker is finding her feet as an investigator. When a wealthy client hires Billie and her assistant Sam to track down her missing husband, the trail leads Billie back to London and Paris, where Billie’s own painful memories also lurk. Jack Rake, Billie's wartime lover and, briefly, husband, is just one of the millions of people who went missing in Europe during the war. What was his fate after they left Paris together?

As Billie's search for her client's husband takes her to both the swanky bars at Paris's famous Ritz hotel and to the dank basements of the infamous Paris morgue, she'll need to keep her gun at the ready, because something even more terrible than a few painful memories might be following her around the city of lights . . .

Tara Moss is an internationally bestselling author, human rights activist, documentary and podcast host, and model. Her crime novels have been published in nineteen countries and thirteen languages, and her memoir, The Fictional Woman, was a #1 international bestseller. Her most recent novel is the The War Widow, which was also an international bestseller and is the first book in the Billie Walker series. Tara is a UNICEF Goodwill Ambassador and has received the Edna Ryan Award for significant contributions to feminist debate and for speaking out on behalf of women and children. In 2017, Tara Moss was recognized as one of the Global Top 50 Diversity Figures in Public Life. In 2021, she reported, wrote, and hosted the Audible Original true crime podcast The Man in the Balaclava. Moss lives in Vancouver with her family.