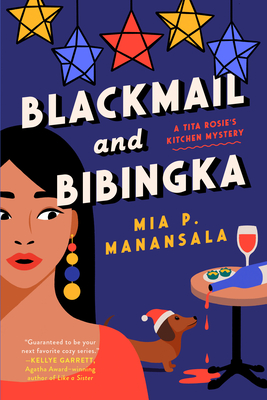 When her long-lost cousin comes back to town just in time for the holidays, Lila Macapagal knows that big trouble can’t be far behind in this new mystery by Mia P. Manansala, author of Arsenic and Adobo.

It’s Christmastime in Shady Palms, but things are far from jolly for Lila Macapagal. Sure, her new business, the Brew-ha Cafe, is looking to turn a profit in its first year. And yes, she’s taken the first step in a new romance with her good friend Jae Park. But her cousin Ronnie is back in town after ghosting the family fifteen years ago, claiming that his recent purchase of a local winery shows that he’s back on his feet and ready to contribute to the Shady Palms community. Tita Rosie is thrilled with the return of her prodigal son, but Lila knows that wherever Ronnie goes, trouble follows.

She’s soon proven right when Ronnie is suspected of murder, and secrets surrounding her shady cousin and those involved with the winery start piling up. Now Lila has to put away years of resentment and distrust to prove her cousin’s innocence. He may be a jerk, but he’s still family. And there’s no way her flesh and blood could actually be a murderer . . . right?

Mia P. Manansala is a writer from Chicago who loves books, baking, and badass women. She uses humor (and murder) to explore aspects of the Filipino diaspora, queerness, and her millennial love for pop culture.