Rejected Books: The Most Unpublishable Books of All Time 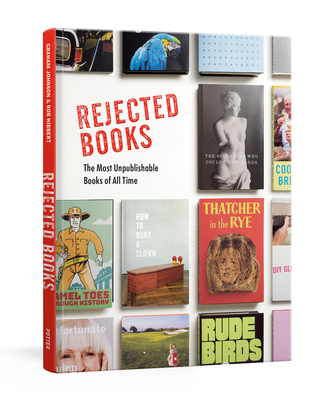 Rejected Books: The Most Unpublishable Books of All Time

Have you ever had a great idea for a book but then thought, “Nobody would ever read that”? Well . . . you’re probably right. But you’re not alone! Enter Rejected Books, a rollicking collection of the best book covers for books that were never meant to be. These awful pitches were turned down for any number of reasons: they’re either too long, too sad, too raunchy, or just plain bad.

The compilation of imagined book covers in Rejected Books will have you scratching your head and guffawing with every page turn. Though Pranks with Sausages and Holy Bible II don’t actually exist, Rejected Books offers up a professionally produced series of photos imagining just what these wacky ideas (and plenty more) could look like.

Enjoy the worst book pitches of all time and rest assured that anyone can have a future in publishing . . . even if your ideas are totally horrible.

Graham Johnson, after being rudely interrupted by a thirty-year career in advertising, is now back to creating ideas for books that will be intentionally rejected, as well as products that should have been rejected (like invisible action figures and timetables for time travel machines). Graham has reassessed his priorities and has realized that figurines made of air and a timetable for a means of travel that doesn’t exist yet are a far more useful contribution to society.