The Girl Who Built an Ocean: An Artist, an Argonaut, and the True Story of the World's First Aquarium 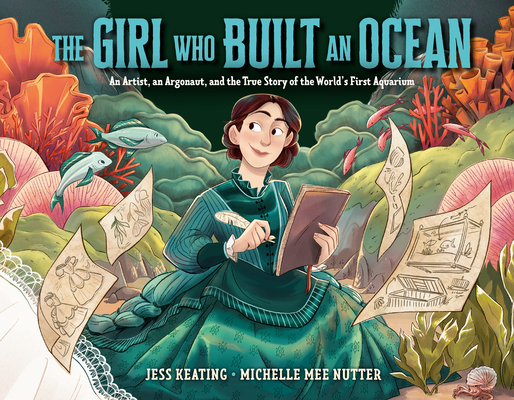 The Girl Who Built an Ocean: An Artist, an Argonaut, and the True Story of the World's First Aquarium

By  Jess Keating , Illustrated By  Michelle Mee Nutter
Hardcover
$ 18.99
Out of Stock In Store

The inspiring tale of a seamstress-turned-scientist who invented the world's first aquarium at a time when women in STEM were startlingly rare.

The daughter of a seamstress and a cobbler, Jeanne Villepreux-Power began her career as a dressmaker, sewing beautiful gowns for the Parisian aristocracy. But her heart longed for more, and when she moved to the seaside, she became fascinated by the ocean's mysteries.

She filled her pockets with seashells and specimens, and filled her notebooks with oservations about coral and crustaceans and all manner of marine life. The argonaut interested her most of all, but Jeanne's observations of this shy creature were confounded by its tendency to swim away when approached. Jeanne wanted a way to bring a piece of the ocean home with her, and that's she came to build the world's first aquarium—an invention that would pave the way for countless scientific discoveries in the years to come...

Jess Keating (Shark Lady) and Michelle Mee Nutter (Allergic) bring Jeanne's story vividly to life with lively text and vibrant artwork that captures the curiosity and perseverance this pioneering woman in science brought to everything she did.

Jess Keating is a zoologist-turned-author who writes with the sort of wisdom you can only get from multiple crocodile bites and skunk sprays. She's received oodles of state awards and starred reviews for her books, which include the World of Weird Animals nonfiction series and the biographies Shark Lady and Ocean Speaks. She also dabbles in illustration, has her own Youtube Channel, and runs a blog that's popular with teachers and librarians for its exploration of STEM subjects and the writing process. Jess lives with her husband in Ontario, Canada.

Michelle Mee Nutter graduated with a BFA in Illustration from the Massachusetts College of Art and Design. Her work has been recognized by the Society of Illustrators, 3x3 Illustration, Creative Quarterly and she is the illustrator of the graphic novel Allergic. Nutter lives in Boston, Mass.