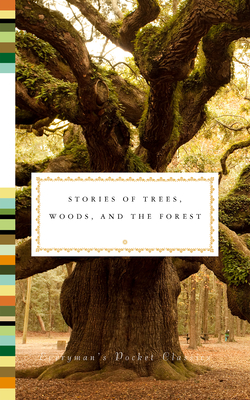 Trees have starred in stories ever since Ovid described the nymph Daphne’s metamorphosis into a laurel, and the landscape of literature has long been enlivened by wild woodlands, sacred groves, and fertile orchards. This delightful collection ranges from Ovid to Austen and from Robin Hood’s Sherwood Forest (via Thomas Love Peacock’s Maid Marian) to Washington Irving’s “The Legend of Sleepy Hollow.”

Here are forest-haunted fairy tales both classic (the Brothers Grimm) and inventively retold (Angela Carter). There is room in these woods for comedy as well as terror, in Stella Gibbons’s Cold Comfort Farm, and Alexander McCall Smith’s “Head Tree.” Notable writers from around the world contribute arboreal fiction—from South Africa, Finland, France, Zimbabwe, Russia, Martinique, and India, as well as Britain, Ireland, Canada, and America. From Daphne du Maurier’s “The Apple Tree” to R. K. Narayan’s “Under the Banyan Tree,” the sheer range of stories in these pages will leave readers refreshed and dazzled.

FIONA STAFFORD is a professor of English literature at Oxford University. The author of many books, including a biograph of Jane Austen, she also wrote and presented the highly acclaimed "The Meaning of Trees" for BBC Radio 3's The Essay. Her book The Long, Long Life of Trees, published by Yale University Press in 2017, was a Sunday Times Nature Book of the Year.