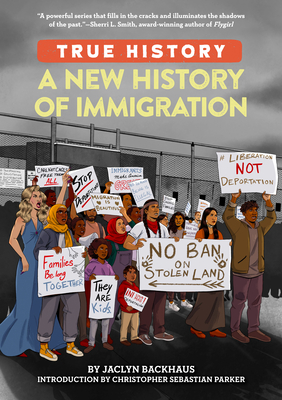 By  Jaclyn Backhaus , Created by  Jennifer Sabin , Introduction by  Christopher Sebastian Parker
$ 8.99
Out of Stock In Store

"An accessible and frank primer on immigration in the United States. [A] much-needed exploration of the truths behind U.S. immigration history." -- STARRED REVIEW, School Library Journal

Introducing a new nonfiction series that uncovers hidden histories of the United States.

The true story of a nation of immigrants and its dreamers.

The United States has long been touted as a place where anyone with a little grit and determination could come to pursue the American Dream. But as more walls are erected and borders are closed, is that dream still alive today?
Complete with an 8-page color photo insert, A New History of Immigration introduces young readers to alternative histories of immigration beyond Ellis Island and amplifies the voices of marginalized immigrants and their stories of success.

Jaclyn Backhaus is a playwright and the winner of the 2018 Horton Foote Prize for her play India Pale Ale. She lives in Brooklyn, New York.

Christopher Sebastian Parker is a professor of Social Justice and Political Science at the University of Washington. His work can be found in the New York Times, Washington Post, and Politico. He regularly appears on MSNBC, PBS, C-SPAN, and the History Channel. He lives in Seattle, Washington.