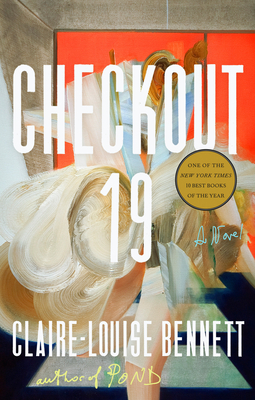 By  Claire-Louise Bennett
Hardcover
$ 27.00
Likely On Our Shelves

“Bennett writes like no one else. She is a rare talent, and Checkout 19 is a masterful novel.” –Karl Ove Knausgaard

From the author of the “dazzling. . . . and daring” Pond (O magazine), the adventures of a young woman discovering her own genius, through the people she meets–and dreams up–along the way.

In a working-class town in a county west of London, a schoolgirl scribbles stories in the back pages of her exercise book, intoxicated by the first sparks of her imagination.  As she grows, everything and everyone she encounters become fuel for a burning talent. The large Russian man in the ancient maroon car who careens around the grocery store where she works as a checkout clerk, and slips her a copy of Beyond Good and Evil. The growing heaps of other books in which she loses–and finds–herself. Even the derailing of a friendship, in a devastating violation. The thrill of learning to conjure characters and scenarios in her head is matched by the exhilaration of forging her own way in the world, the two kinds of ingenuity kindling to a brilliant conflagration.

Exceeding the extraordinary promise of Bennett’s mold-shattering debut, Checkout 19 is a radical affirmation of the power of the imagination and the magic escape those who master it open to us all.

Claire-Louise Bennett is the author of Pond, which was shortlisted for the Dylan Thomas Prize and won the inaugural White Review Short Story Prize. Her short fiction and essays have been published in The New York Times Magazine, Harper’s Magazine, and other publications. She lives in Galway, Ireland.