It's About Damn Time: How to Turn Being Underestimated into Your Greatest Advantage 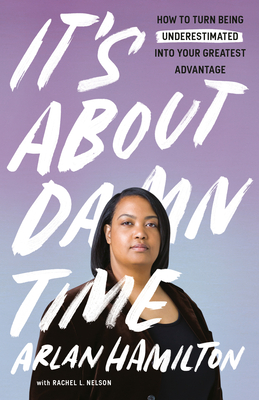 It's About Damn Time: How to Turn Being Underestimated into Your Greatest Advantage

“A hero’s tale of what’s possible when we unlock our potential, continue the search for knowledge, and draw on our lived experiences to guide us through the darkest moments.”—Stacey Abrams

From a Black, gay woman who broke into the boys’ club of Silicon Valley comes an empowering guide to finding your voice, working your way into any room you want to be in, and achieving your own dreams.

NAMED ONE OF THE BEST BOOKS OF THE YEAR BY FORTUNE

In 2015, Arlan Hamilton was on food stamps and sleeping on the floor of the San Francisco airport, with nothing but an old laptop and a dream of breaking into the venture capital business. She couldn’t understand why people starting companies all looked the same (White and male), and she wanted the chance to invest in the ideas and people who didn’t conform to this image of how a founder is supposed to look. Hamilton had no contacts or network in Silicon Valley, no background in finance—not even a college degree. What she did have was fierce determination and the will to succeed.

As much as we wish it weren’t so, we still live in a world where being underrepresented often means being underestimated. But as someone who makes her living investing in high-potential founders who also happen to be female, LGBTQ, or people of color, Hamilton understands that being undervalued simply means that a big upside exists. Because even if you have to work twice as hard to get to the starting line, she says, once you are on a level playing field, you will sprint ahead.

Praise for It’s About Damn Time

“Reading Arlan Hamilton’s It’s About Damn Time is like having a conversation with that frank, bawdy friend who somehow always manages to make you laugh, get a little emo, and, ultimately, think about ­­the world in a different way. . . . The book is warm, witty, and unflinching in its critique of the fake meritocracy that permeates Silicon Valley.”—Shondaland

Arlan Hamilton is the founder and managing partner of Backstage Capital, a venture capital firm dedicated to minimizing funding disparities in tech by investing in high-potential founders who are people of color, women, or LGBTQ. Backstage has now invested more than $5 million in more than one hundred start-up companies led by underrepresented founders. In 2018, Hamilton co-founded Backstage Studio, which launched accelerator programs in Detroit, Los Angeles, Philadelphia, and London. She is the first non-celebrity Black woman to be featured on the cover of Fast Company.